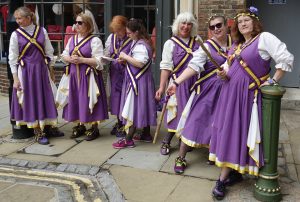 Fleurs will be dancing out at local pubs on a Tuesday night, do come and see us!

Weekend of 2nd/3rd April, Fleurs will be in Godalming town celebrating the life of a much missed friend and legend Steve Goddard.

Saturday 7th May Broadwood Day of Dance in Horsham

Tuesday 24th May The Olde Sun in Plaistow 7.30pm

FLEUR DE LYS MORRIS were set up during the folk revival in 1976, we dance Stave, Cotswold and some Border dances.

ABOUT US
We are a predominantly Ladies’ dance side with both sex musicians, and we occasionally dance out with Cup Hill Morris Men. Our emblem the Fleur de Lys or Lily flower, is one possible origin for the name of our County town Guildford ‘The Golden Ford’ referring to the Yellow and Purple Flag Irises that grew around the marshy fords, our kit reflects those vibrant colours. We dance Stave dances (back in the day taught to us by Roy Dommett), based on the processional steps of The Friendly Societies, along with Cotswold and Border styles, we also have our own Farncombe Tradition music and dances.
You will find us out and about all through the year, dancing at various local Pubs, Fetes and Town events, as well as further afield at Folk Festivals, so see you there!

We can be booked for private events, Fetes, Parties, Weddings, Care Homes etc, so if you are looking for something a bit different, get in touch to ask about our rates.

If you are interested in joining us as a dancer or musician, please get in touch. Morris dancing is great fun, and provides members with a great social life, every season brings a full calendar of event dancing, pub sessions and weekend folk festivals. We dance out all summer, and practice during the winter months on a Tuesday evening in Godalming, followed by a jar in the pub. 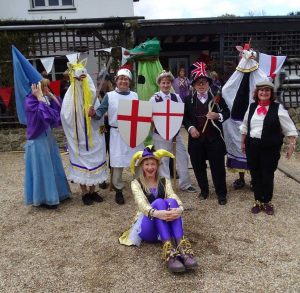 Godalming Tipteerers Mummer’s group are made up of Fleur de Lys dancers and musicians, we are sometimes joined by members from other local Mummer’s groups, Godalming Guisers, Haslemere Mummers, and Chiddingfold Tipteerers.
We perform Mummer’s plays for St. George’s Day, and May Day morning up at Hydon’s Ball in Hambledon.